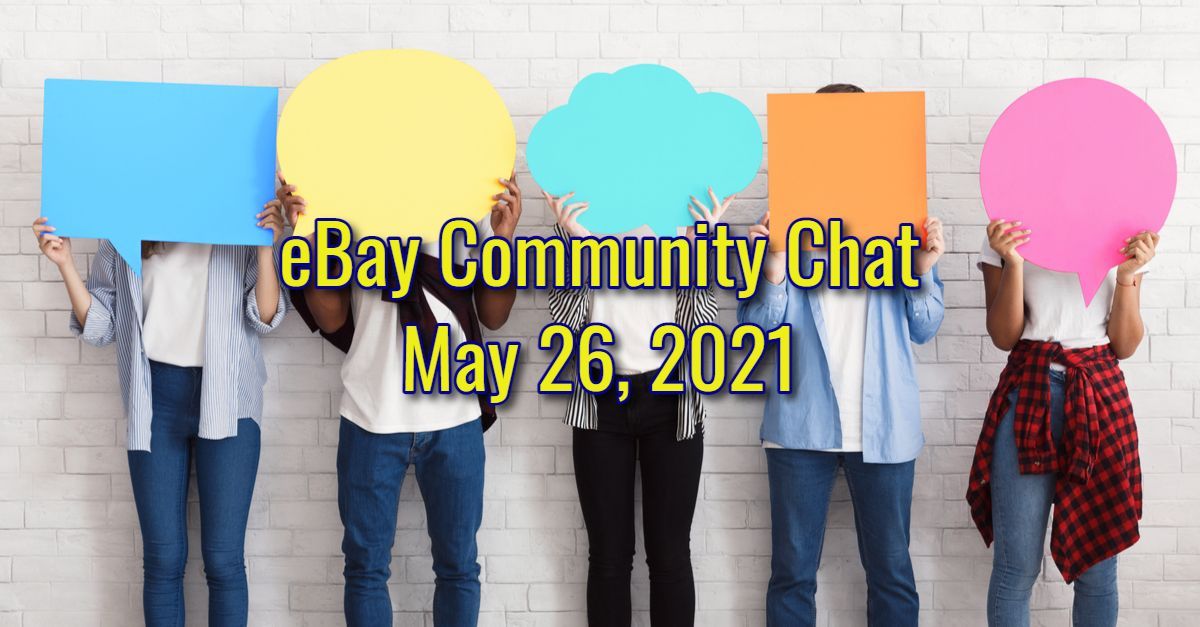 Note from Liz - this post is not meant to be an exhaustive synopsis of the weekly chat. I've chosen to highlight topics I found particularly interesting - the full chat can be found here:

Once again this week, sellers still have questions and concerns about Item Specifics.

Did anyone review the item specifics being created and before they were added to the software?

Does anyone review the data that has been used to establish those item specifics?

Some of the humorous ones I have seen:

Napkin rings - sex / choice of male or female. Could you get the IS team to provide a picture?

Our structured data team works on this information and it's a lot to manage as you can imagine.

If you are running into item specifics that are in the wrong category or seem to be mismatched while you're trying to list, I highly recommend reporting this directly to this team sdsupport@ebay.com so they can review and possibly make improvements.

With regard to adding new item specifics to trading card listings, is there a way to breakdown the bulk listing spreadsheet download file into smaller manageable pieces? For example, previously when trading cards had sub-categories of baseball, basketball, etc., you could choose to create a download spreadsheet for each individual category. Now that all of the sub-categories have been removed, everything is lumped into "Trading Card Singles". I have over 10,000 listings that need minor updates to accommodate the new mandate. However when I try to download the spreadsheet file I can no longer get it by subcategories. It is downloading an unmanageable sized spreadsheet of 10,000 entries. Can anyone suggest a more reasonable way to update 10,000+ listings?

Hi @randomsl - I'm not aware of a way to get the download to display what subcategories used to be.

I'm not sure if 3rd party listing softwares like Auctiva or SixBit have that capability though (best to check with them directly).

Otherwise the only tools we really have are the Bulk Edit tool or the Reports>Downloads option in SellerHub (formerly FileExchange).

I'll make sure that this is shared with the right teams to see if there is any suggestion I'm not aware of and keep you posted!

The new packing slip was introduced in the March Seller Check-In and apparently sellers are having some technical problems with it.

Last week there was an issue with printing packing slips. There were at least two, probably three separate threads on the technical board reporting the problem. The problem existed longer than 48 hours and was impacting multiple sellers.

there was no response on the technical board at all to let anyone know the status.

If the board does not get read by technical staff, how do we report not just the problem, but the continuation of the over several days?

By chance, I think I discovered what was causing the problem...a programming change that apparently wasn't well implemented.

But it would have been nice to have our problems acknowledged.

@postcardcountry the best way to report technical issues is by contacting customer service. Go here and select a topic and you'll be given options to contact customer service. They will take your report and send it to our tech team for review.

I was looking at packing slips a couple days ago and the one issue that stood out to me is that when you include a comment on the slip, it posts the registered name on the account. We should have the option to change that to our eBay ID- or the name of a customer service rep within our company.

@coffeebean832 - Thank you for this feedback! I'll get it passed on to the shipping team!

coffeebean832 also had another technical issue with the new Feedback page with some sections randomly displaying in German or Chinese!

Thanks for posting these examples coffeebean832 . I'm the one that mentioned the German language on the feedback popup previously, but haven't seen it since to provide screenshots.

The other day, I was trying to add a note to multiple transactions, and the note popup was in German. So was the note label under the transactions after I submitted. Before I could get a screenshot, I started playing with it and it switched to English...once again, I couldn't recreate it to get screenshots.

Now that we know we have problems with feedback, notes, and tracking appearing in German on what looks to be a random basis, hopefully that will help the developers track down the bug.

Hi @coffeebean832 - thank you so much for the screenshots! I will work to find the right feedback folks to get this to so that it can be addressed (the Chinese and German bits especially), as well as the Seller Hub teams.

coffeebean832 wanted to make sure to call attention to problems with the new pop up design for ending listings.

Thanks, Tyler. The above quoted part is the biggest issue for me. If they're going to force a page refresh when you end a listing- then at the very least they need to preserve your spot on the page so it doesn't disrupt the workflow. Scrolling through 200 listings per page to find where I left off is not only disruptive to listing management- but it's inefficient. Tasks like that shouldn't have obstacles to make them take longer.

I really hate this new pop-up system. I prefer to open pages in new tabs.

Definitely agree that the refresh should be 'sticky' @coffeebean832 - it's very unhelpful to have to scroll again.

saturdaystoys made a plea to get more clarity on a question that has been lingering for a month.

Just a follow-up in regard to Concierge premium service for sellers. I had inquired a month ago and was encouraged to contact Customer support to find out why my account was removed from Concierge level of service that I had received for the past several years.

While I understand that eBay staff monitoring this chat have reported that Concierge service is not going away... I've gotten the exact opposite answer from Customer Support. In fact, I was told that all previously approved Concierge participants would receive a notice (via email and eBay messege) two weeks ago as to the upcoming changes as the existing program is phased out (and that mine was among the first wave of accounts impacted). Bottom line: there was no later communication about the problem; just silence.

My most significant frustration has been that even after a half dozen attempts to work with Customer Support on my question... absolutely no one could tell me why my Concierge service was deactivated over a month ago. They tell me there's not a problem with my account... that my service record is outstanding... and that I should still qualify for the program. However, after several promises of reporting the matter to "the back office" (and other vague references to eBay's Concierge managers)... I still have no information as to what happened.

Isn't there something that we can do to facilitate some kind of communication in this regard. If there's a problem... I want to understand it... and take steps to correct it. I'll sure be grateful for the input...

Unfortunately there was no real clarity to be found.

Hi @saturdaystoys - sorry to sound a bit like a broken record, but there has been no announced deprecation of the Concierge service either internally or externally. I know that Concierge regularly reviews their population and will remove members that no longer qualify for the service (they do not elaborate as to what their criteria for this are).

I will have your contacts to CS reviewed to ensure proper coaching is provided to the teammates you spoke with.