Per the Stores Team via eBay community staff:

“eBay occasionally runs some A/B tests (usually 2 weeks long) to understand what experiences can help improve conversion from sellers’ storefronts. The tests that prove to be helping with conversion, we are adding those changes on your storefront, so you can get the conversion benefits from it right away.

However, We are already working on adding seller control for those for good changes in coming weeks, so you can remove those rows if you still would prefer to not have it on your storefront. Please note, If your feedback is about Featured categories row on storefront, then that’s part of an A/B test and the test will end in coming week.”

I'm glad eBay finally gave us an answer, however it's a bit perplexing to me why they felt the need to force this option in order to do their test to measure conversion rates.

The Featured Category module has been available as an optional feature for some time and plenty of sellers have voluntarily set it up for their stores in that time.

I would imagine eBay can and does already collect data from stores that opted in and stores that didn't, so they should be able to look at buyer habits and see if they convert at a higher rate for stores that use that feature already.

While I can understand it may be helpful for eBay to see how buyers react to different versions of the same store, hijacking seller preferences for the sake of testing with no warning or communication is not a great way to engender trust in your supposed "partners."

If eBay really wants to be our partners, they should set up a voluntary beta testing program where sellers can opt in and give explicit consent to be part of a pool of test subjects they can choose from when needed - or at least that's what they would do if CEO Jamie Iannone really meant it when he said "openness, honesty, respect and doing business with integrity drives our success."

eBay sellers who've discovered changes made to their Store setups without permission are wondering if it's a glitch, test, or unannounced change.

Not only is it concerning that sellers who didn't choose this option can't disable it, it also appears eBay is randomly choosing the image to use for category thumbnails and may be using images from listings that are already sold or out of stock.

We choose with our stores whether we want to add rows that feature categories and listings on our storefront. I set my preferences months ago when the new store layout went live.

Today I notice eBay has added a featured row for something I did not select in my settings.

I went to the Hub to manage my store and the row they added is unchecked in settings, so I couldn't turn it off if I wanted to.

Anybody else seeing this?

Making things even worse, they auto-select the image for each featured category, and one of the listings has been OOS for a few weeks and 2 others are nearly OOS. Definitely not what I would have chosen as featured images to represent the categories.

...but I do not want to waste the real estate. I don't have enough categories for that row to be a value-add. I do not want it there pushing down the rows I choose to feature. It was my strategic choice to not add a featured categories row. eBay is forcing it with no way to turn it off.

So you guys can see what I'm talking about, I took some screenshots.

Top half of each image shows store in Firefox/Chrome with the sellers' chosen preferences.

Bottom half of each image shows store in Safari/Brave with eBay-forced featured categories row. This row cannot be removed on the manage store page because the seller did not select it and when eBay forced it, they did not alter settings the seller has access to. 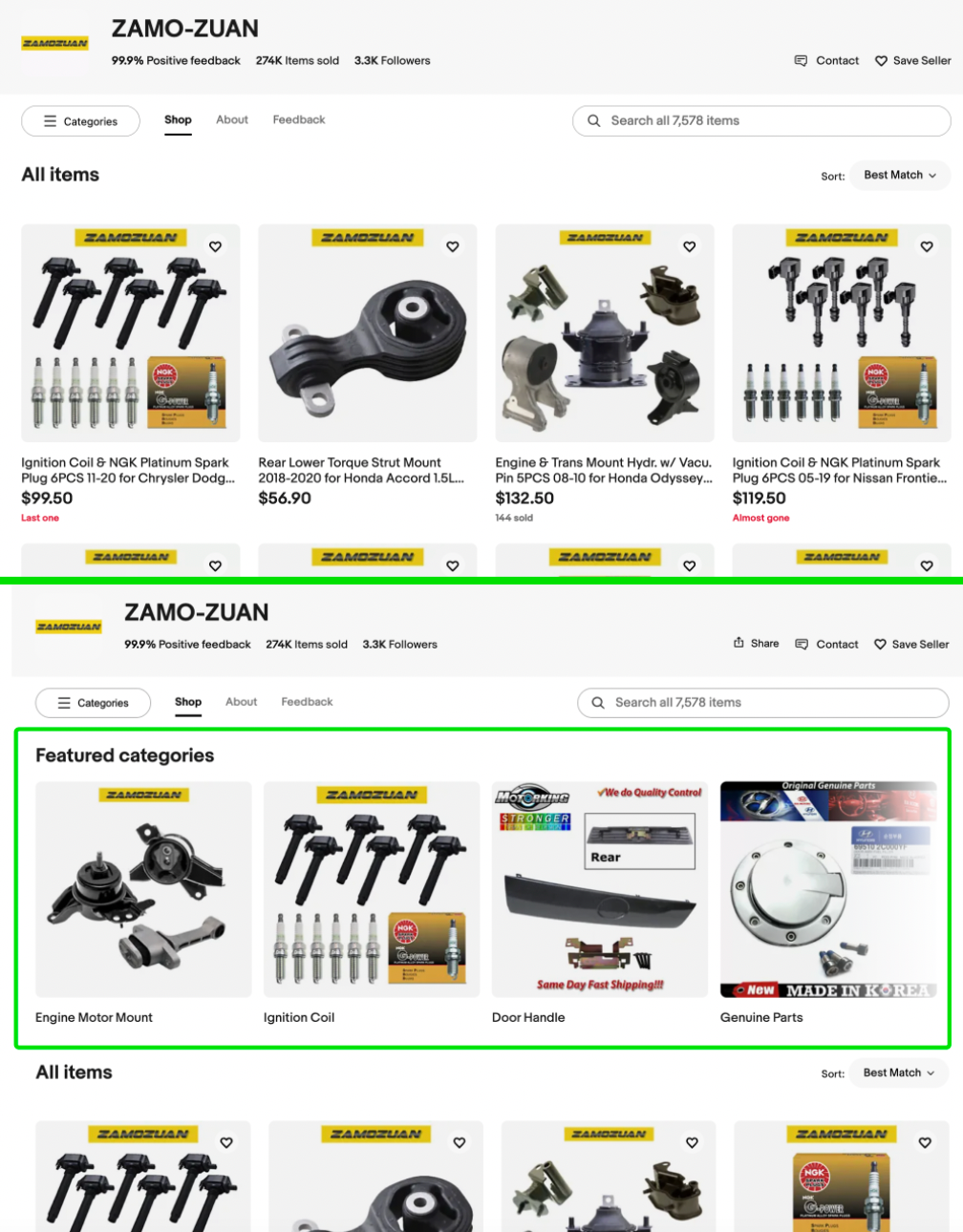 eBay advertised the storefront as customizable to the seller's preferences in terms of featured content. If it's a glitch then fine, let's hope they fix it. If it's a test then that really stinks because it goes against what eBay's been pushing at us all year: the ability to choose what's featured on the storefront we're paying for.

Would it surprise me if this was a test or intended change that's unannounced? No. It would be very "eBay" for that to be the case. I'm hoping it's a glitch that they can correct this week since we're into holiday shopping season.

When someone uses a banner at the top of their storefront, the first row of listing real estate is all that's shown before a user has to scroll. We should be choosing that content for our own storefronts.

So the age old eBay seller question - is it a glitch, test, or unannounced change?

So far in testing, it appears the Featured Categories section is consistently appearing when viewed in Chrome on PC and Safari and Brave on Mac, but not appearing in other browsers, according to the original poster in the eBay community.

I've personally tested on PC and did see it in Chrome, but not in FireFox or Brave.

That has me leaning a little more toward the possibility of a test, where maybe eBay is A/B split testing in different browsers to see how buyers interact with the different store modules.

I'll update as we learn more, but in the meantime - check your eBay store in multiple browsers and let us know in the comments below if you are seeing a Featured Categories section you didn't set up!