In what might be some truly good news for buyers and sellers, it appears eBay is reversing course on their previous decision to remove the "Report" button from eBay messaging.

The news comes in the form of an answer in the Q&A tab in today's Holiday Seller Check In with eBay Senior Manager, GCX Analytics Philip Broadbent saying a report option for messaging in the works now and should be rolling out "in the next few months."

eBay removed the report link from messages so many years ago, but they'll be adding it back in, making it easier to report bad actors.

Friend sent me a screenshot from the eBay Seller Check-In that happened today. 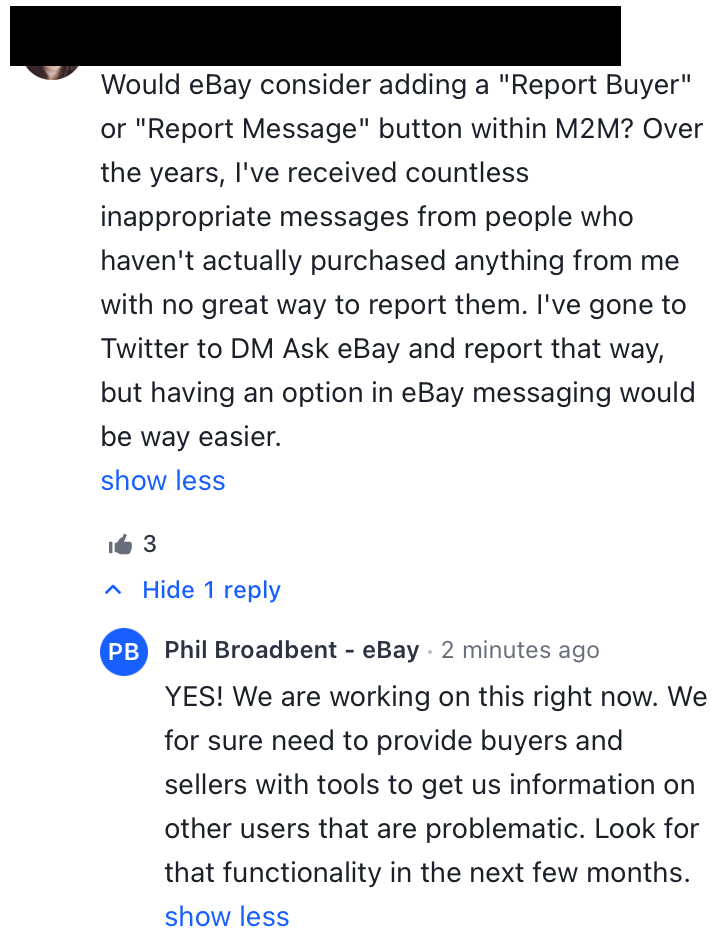 The previous message reporting feature was removed years ago, to the dismay of many users who believed it was essential for reporting scams, fraud, harassment, and abuse on the platform.

Back in a weekly community chat in 2019, a seller asked why eBay had removed the option:

Could you please explain why ebay removed and refuses to reinstate the "Report" button in the ebay message system?

It seems to me this feature is needed by users more than ever. There have been increasing reports on the boards of many scam attempts made through this system including but not limited to:

SHIPPING REDIRECTS i.e. "My father just had a heart attack and I need to leave the state to take care of him...can you ship to this address instead...?" Most often the 'request' is made by a member who is not even the buyer of record.

SET UP FOR THE PHONY PAYPAL EMAIL: i.e. "Something is wrong with check out, can you send me your PayPal email address so I can pay?"

BASIC PHISHING: "I can't use my PayPal gift card unless you change a setting. eBay says to fix it here: (Handy link provided)

TRYING TO SELL US SOMETHING OFF EBAY: "See the great products we have for sale at this website..."

In addition, there does not seem to be any on site "report member" feature anymore either. We can't report unless the person is a buyer or seller of record.

Logically (probably only to me), reinstating the link to report inappropriate use of the message system would be of benefit to ebay users. Calling CS is time consuming and seems an antiquated and unintuitive way to report the fraud occuring on the site via the message system.

The reason the 'report' button was removed was because proactive filters were adopted to screen for these types of situations instead. Returning the 'report message' button isn't currently on the roadmap.

What I think may be helpful instead is to collect some of the most common attempts you're seeing get through and reporting those to get added to the filter's logic. The way you've presented them here is really great, especially if you're seeing the same type of keywords/scenarios/stories used.

Community members chimed in on a dedicated thread to provide Tyler with those examples.

Unfortunately, user pleas to simply but the report button back in messages went unheeded and message based scams, spam, and harassment continue to be a major problem despite eBay's proactive filters.

Users are cautiously optimistic about the answer Philip provided, but say they will believe it when they see it.

Yes, I was one of the posters that was upset that the "Report Message" feature was dispensed with. I believe the "blue" Trinton said at the time that eBay had no intention of ever putting it back. In general, if I recall correctly, it was stated that eBay had some new fancy "algorithm" that would prevent these fraudulent scammer messages from ever appearing in a My Ebay Message ever again, so the report feature was no longer necessary and was thus removed.

Of course that was nonsense, and there was an obvious increase in the text me scammer and change of address scammer messages, feedback extortionists, potty mouths, etc. and they continue to this day. In addition, one could not report a 'text me' scammer or 'change of address' scammer on site. One would have to contact customer service unless the person was a winning bidder or buyer of record.

Though just my opinion, I figured that eBay got rid of it because they just didn't want to be bothered with the increasing incidences. Employing humans to monitor and authority to act was likely not very cost effective, and bots booting buyers would not be acceptable. After all, sellers were the ones being duped or annoyed by the scammers, not eBay. And eBay's attitude had always been (as in the words of a former VP) "We want all buyers, even if they are bad."

If they put it back, especially a one click report button not tied to a buyer of record, I would be (pleasantly) surprised.

Do you want eBay to put the Report option back in messages? Let us know in the comments below!