eBay has posted a message on the advertising page in Seller Hub acknowledging an issue with the reports.

We are experiencing a system issue affecting the reporting of clicks and impressions. The historical data reflected on your advertising dashboard may be incorrect. We are currently working on a fix.

It's great that they're working on a fix for the display issues, but that still leaves lingering questions about whether or not we can trust eBay's ad attribution and statistics given what this glitch has revealed about the formulas eBay appears to be using to calculate the data.

eBay sellers have noticed some very strange things happening with their Promoted Listings impressions and views since yesterday - they appear to be completely missing from the reports in Seller Hub!

Multiple sellers report seeing unexplained drops to 0 Promoted impressions and views in their advertising and traffic report charts for various timeframes this month.

Here are just a few examples:

Anyone else notice that there Promoted Listing Standard data is all messed up for today and yesterday - September 26 & 27?? Under both the Advertising Dashboard and the Traffic Tabs.

This issue not only in ebay.com, also in ebay.co.uk & ebay.ca

I've some listings at ebay.co.uk & ebay.ca , and promoted listings stats there showing same drops in ebay.com 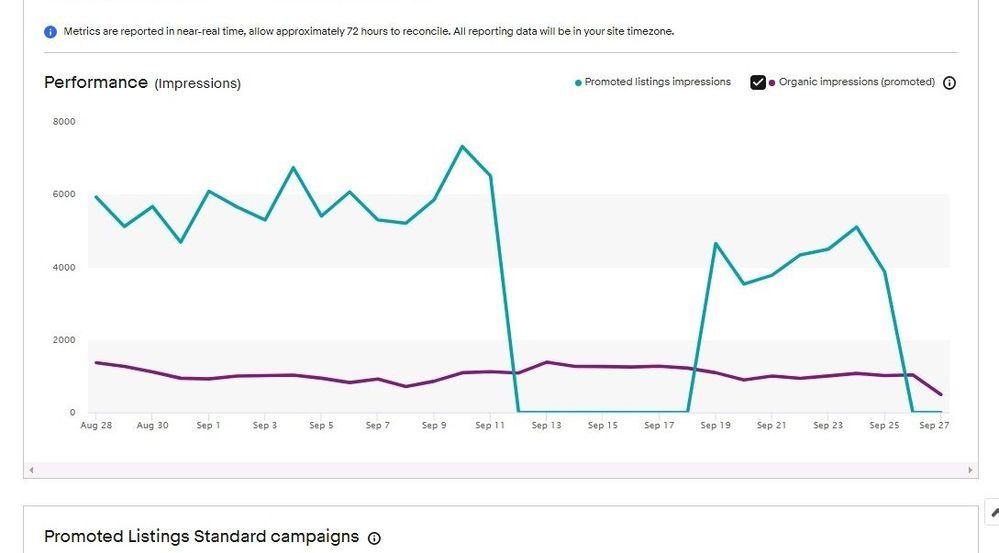 eBay seller Zamo-Zuan sent me these screenshots taken on different days that show the Promoted impressions and views were previously reported for those days and are now missing.

But when you put the two images side by side, it becomes clear that it's not just that Promoted Listings views are missing - they are being counted as Organic instead.

For each day where Promoted views are missing, you can see that the bar on the graph for Organic is larger than it was previously and appears to be increased by the same amount as the missing Promoted views.

How is that even possible?!

Zamo-Zuan has a theory on that, and it's one that definitely seems to make sense based on what we are seeing in these charts.

It looks like eBay may not actually be calculating Organic views independently from Promoted views, but instead is using a formula to calculate the organic number by taking the total views and subtracting promoted views from it.

Basically the theory is:

Sellers have often called out eBay's opaque ad attribution model that basically boils down to "because eBay said so."

When it comes to trying to figure out whether or not you are accurately paying only for actual sales made from Promoted Listings ads, the unfortunate answer is we just have trust what eBay tells us because there is no way for us to verify the data ourselves.

However, when glitches like this missing Promoted Listings impression and view data occur, it can reveal certain things about how eBay calculates and attributes promoted vs organic traffic and sales - and what it reveals just opens up even more questions.

Why would eBay be using a formula to assign whatever isn't designated promoted as organic instead of simply accurately counting both promoted and organic separately and adding them up to get the total?

What would cause Promoted impressions and views to suddenly go missing from the reports?

Can we trust anything these reports show us on a daily basis when taking screenshots from week to week reveals the data sometimes changes?

Even assuming the "lost" data is a temporary glitch - once the data returns, eBay will still presumably be using the same formula to calculate the stats, so all the questions that implies still stand.

And most importantly - what the hell is really going on with Promoted Listings and who at eBay is accountable for this obvious mess?

Are you missing Promoted Listings impressions and views  in your Seller Hub reports? Let us know in the comments below!