eBay's search engine and algorithms have been a frustrating mystery for years and CEO Jamie Iannone's tech-led reimagination has yet to improve the situation - if anything, searching on the platform seems to be getting worse, not better.

I'm seeing an increase in reports of searches returning "0 results found" when in fact there are results that match the exact terms entered by the user.

Hard to figure this one out. Search criteria: plink variety pack (no quotes)

brings back a screen telling me 0 Results Found so instead they are showing me 'pink variety pack' EXCEPT the first 7 results are clearly what I wanted. 5 of them have the words 'plink variety pack' in the title, one of them as the first 3 words.

I'm used to weird results b/c of I/S's, but this is just odd. I mean it did return what I was looking for, but it doesn't think it did, telling me there were 0 matches. The other 800 some results were unrelated, as one might expect since it claims to have substituted the word "pink" (though the first 7 don't use "pink". I cannot figure out the logic here.

Why would it even sub my keyword, when there are clearly results with my kw.

I was able to replicate this one and can confirm, the search says there are 0 results for plink variety pack, autocorrects to "pink variety pack", but then displays results that match the original search terms.

This is just one example but I've found many more across the community and social media.

Another seller found some very strange things happening with search last week that indicate Promoted Listings may not be displaying correctly or that something in the algorithm has considerably changed the sort order and ranking of Promoted vs Organic listings.

I thought I would let others know of my recent findings. I noticed some strange volatility and patterns in eBay’s traffic for the last few days, so I thought I would research a little further to see if I could figure out what is going on, and I believe I’ve stumbled upon some major issues.

The first thing I was trying to look in to was my odd observation that all of the top sellers in our category , all who have consistently been ranked on top of eBay’s organic search for years, in addition to being the biggest investors in Promoted Listings, seem to be all ranking far down in search results.

I was curious as to what may be causing this. As it seems to imply that both organic search rankings as well as PL are not actually being factored right now.

I began researching how Promoted Listings are showing up. Prior to this, in our category, the first 2 results were pretty consistently marked “Sponsored”. In the morning, I’d noticed just 1 “Sponsored” rather than two. So I thought I’d check again and research a bit further…

I was surprised by what I’d seen: 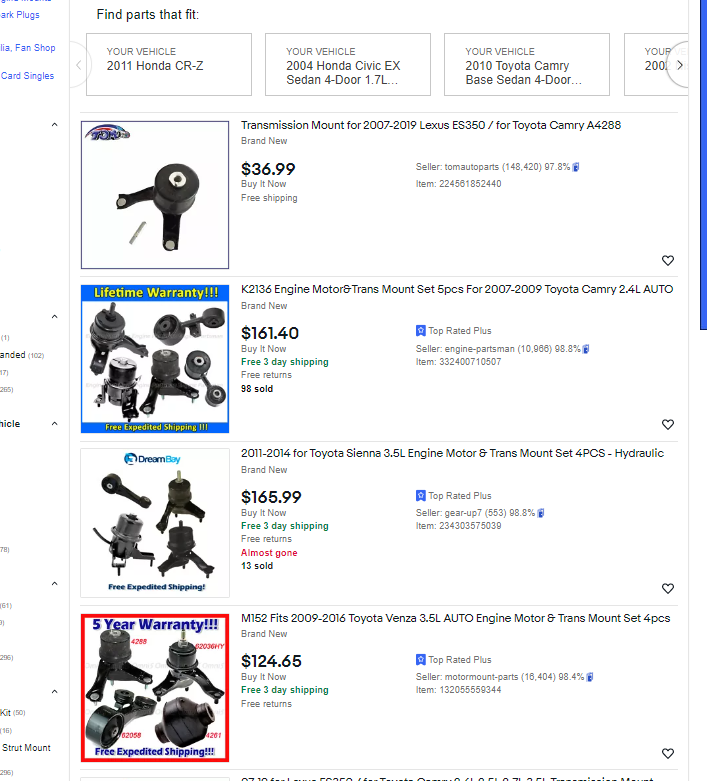 None of them sponsored…? I scrolled down a bit, it seemed that NOTHING was marked as sponsored?

So then I tried a search, as I usually do, to try to count how many sponsored (if any) might be on the page. Hit Cntl + F, and searched for “Sponsored”. My results: 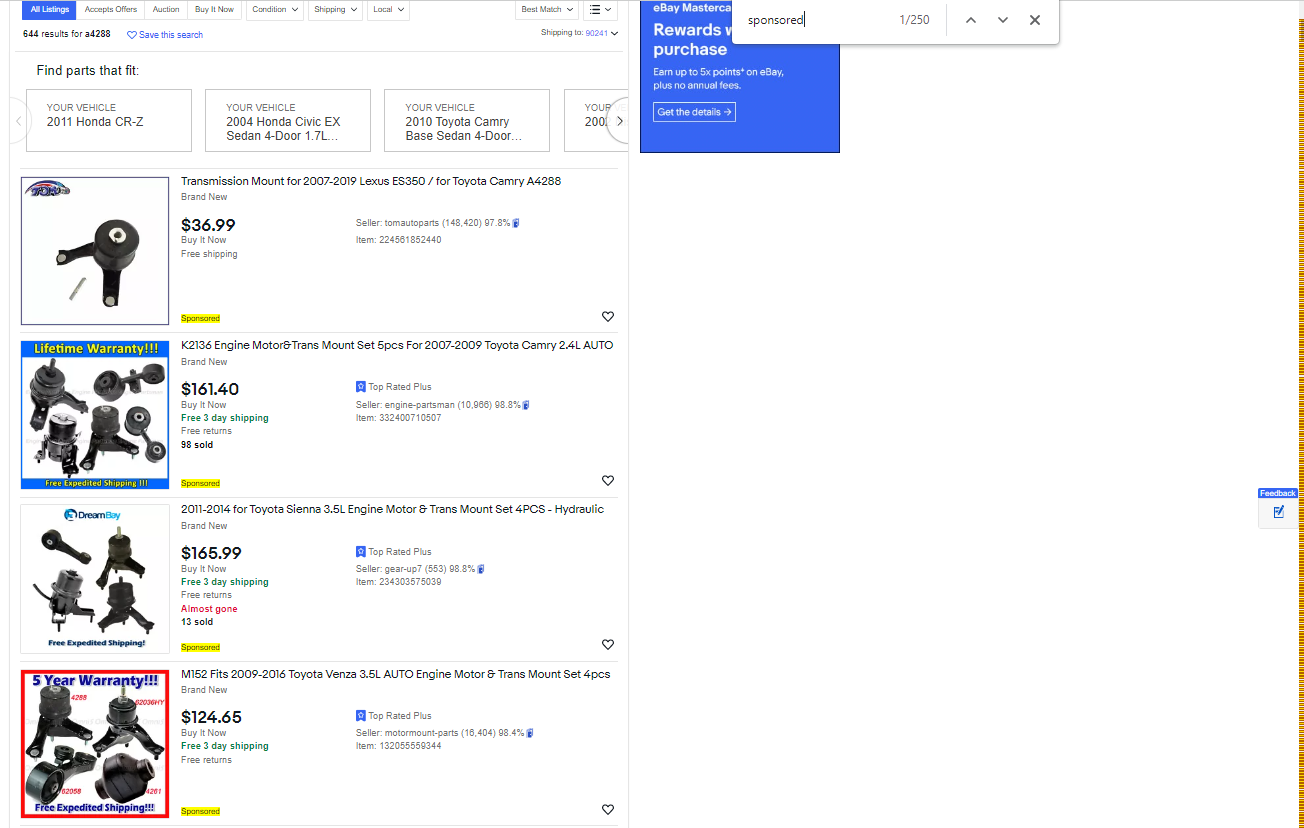 Literally EVERY single search result is secretly marked as sponsored!! But the text is in a white font that’s not visible unless you search for it or highlight the text in the listing!

Considering nothing was showing as promoted, while at the same time everything has a secret ‘hidden’ promotion mark, that seems like quite clear evidence to me that something is indeed broken in their search/promotions system.

I had asked some friends about this, and none of them had it where ZERO promoted items appeared on the page like mine did, although they did mention the results had very few promoted items. But doing Cntl + F, they all did have every item secretly marked as promoted!

There was quite a bit of discussion about the transparent/hidden "sponsored" text, with some sellers stating they've seen that happen for years and it's simply the mechanism by which eBay turns on or off whether a search result is shown as sponsored - basically that wording is transparent if it is an organic listing and then "turned on" by making that text visible when it is showing the promoted version of the listing.

That's plausible and honestly, I'm not sure exactly what the transparent "sponsored" text really means. I've reached out to eBay to try to get a clearer understanding of why that transparent text exists and how it may be impacting search and will update if I receive more information.

What I am sure of is it is absolutely not normal to see 0 promoted listings in a search with over 200 results on the page - especially in a very crowded and competitive category such as Parts & Accessories.

"How are 250 results appearing in a search that shows a max of 200 items, with the transparent sponsored text applying to every single one of them?"

No actual visual sponsored text for a single one of the 250 results?

Related to what shipscript has mentioned, 50 sponsored results is far above what would would typically be shown.

Either way we approach the issue, it doesn't add up and implies issues on Friday.

I have to agree with this seller - no matter how you slice it, there are some very strange things going on with eBay search right now, none of which seem to be helping the vast majority of sellers.

What's really going on here and how much of an impact is it having on sales across the platform? eBay owes sellers an answer, though I won't hold my breath it will be anywhere near as transparent as that hidden sponsored text.

What problems have you seen with eBay search recently? Let us know in the comments below!