Velvet has confirmed that sellers receiving fee credits when fully refunding the item price, but not the shipping amount, is working as intended.

I've heard back that the credit you're seeing is working as designed. It's the exception to the rule for Final Value Fee credits with partial refunds. They'll also work to update wording both internally and public facing so there should be less confusion going forward.

Velvet@eBay responded to the thread with what some sellers considered an ominous answer.

Everything indicates that a partial refund of any kind should not provide a Final Value Fee credit. Given the example was from August, please keep us updated on what happens with your claim. If you fall into the instance described and you get the Final Value Fee credit when only refunding the item amount, then please let us know so we can work to have things updated.

That prompted one seller to ask what exactly working to have things updated meant.

Does that mean updated to correct the policy page with regards to remorse returns, or does it mean to update the system so we stop getting fee credits in this situation velvet@ebay? You're making me nervous here.

I'm not sure. I would let them know what's going on and that decision would be out of my hands. If there's a discrepancy between policy and process then they would work to align the two. I'll keep my fingers crossed that it's the policy that gets updated if (original poster) comes back saying they got the FVF credit.

The seller who had originally asked the question in the chat came back to confirm that they did in fact receive a final value fee credit when refunding only the full item price, but not the original shipping.

I received my return today and processed the refund. There was a toggle I would have had to move if I chose to refund the initial postage paid by the buyer -- I did not do this. I refunded the cost of the item only and was given a credit for the final value fees (except for the thirty cents).

So now we wait to see what happens when Velvet "works to have things updated." If eBay reverses course on this, I predict there will be some serious backlash, especially from sellers who sell larger/heavier items and use calculated shipping for this very reason.

A seller asked a question about fee credits on remorse returns in yesterday's weekly community chat and the response has some sellers wondering if eBay has made an unannounced policy change.

On a remorse return where I do not refund the initial postage paid by the buyer, do I then forfeit the final value fees on the whole transaction by doing this?

At this time, you are correct. The Final Value Fee would not be credited with a partial refund like that.

Another seller stepped in to correct what appears to be either incorrect information or an unannounced change to policy.

Since when velvet@ebay? I know FVF aren't credited on partial refunds- but in the event of a remorse return when original shipping was charged separately- refunding less original shipping has always been considered a "full" refund and triggered an automatic fee credit.

And another seller confirmed that experience.

I agree this has also always been my experience too. In fact I believe that if the refund is 80% or more of what was originally paid by the buyer a FVF charged the seller is refunded. I think I learned that years ago from Trinton. This of course may have changed.

At one point partial refunds allowed for FVF credits if certain stipulations were met, but since moving to managing our own payments, it's not something we currently offer. You can go here for more on Fee credits and I'll include a screen shot as well: 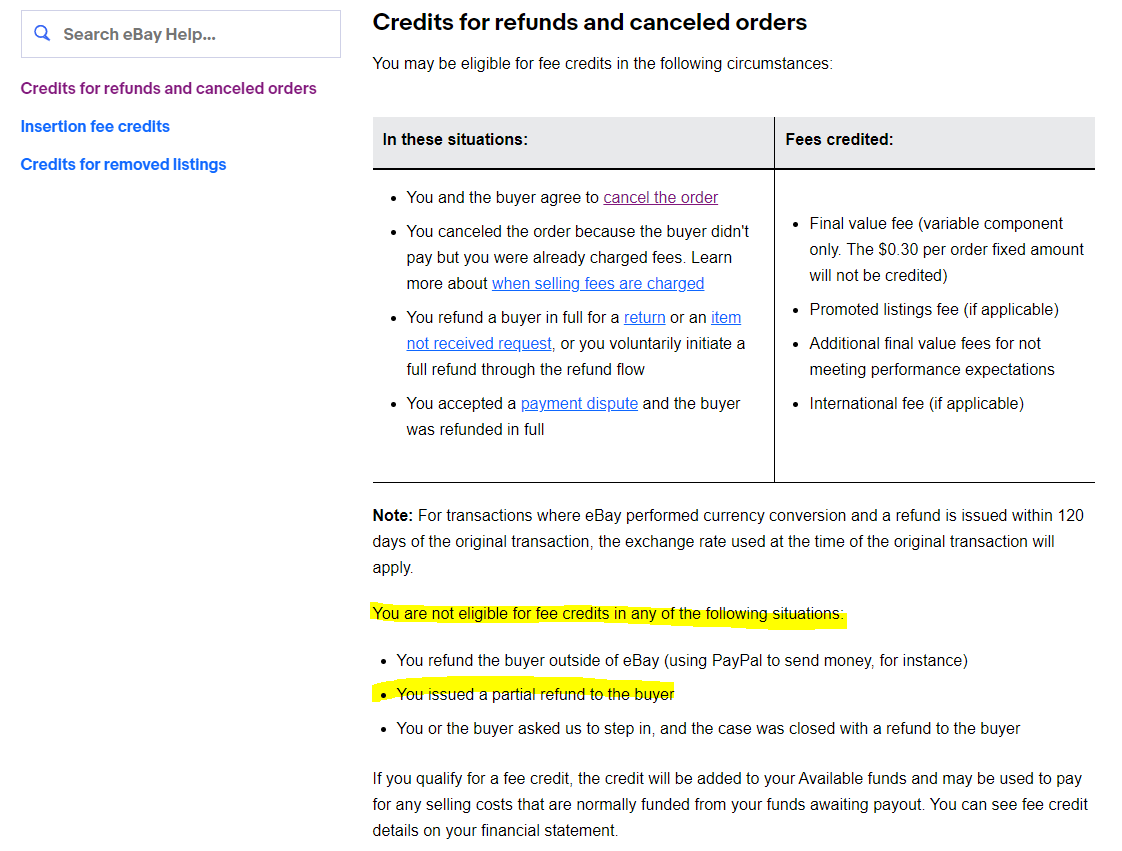 Since no further replies could be posted in the chat, one of the concerned sellers opened a follow up thread to attempt to get some clarification on the issue.

The chat is locked so I'm posting my reply here-

When there is a remorse return filed and a buyer pays a separate shipping cost (not free shipping)- your FVF will be automatically credited when you refund less original shipping. It is considered a full refund in a remorse situation.

I've been in MP for several years velvet@ebay and FVF have never been withheld in this situation. It's only when you issue a partial for any other reason- like an item returned damaged, etc- that FVF are not refunded.

To show you an example since this was your question- here are screenshots to demonstrate that my FVF of $9.09 was credited. It doesn't show up as a separate line item that you're credited- but it is applied to the buyer's refund from eBay's end of things. 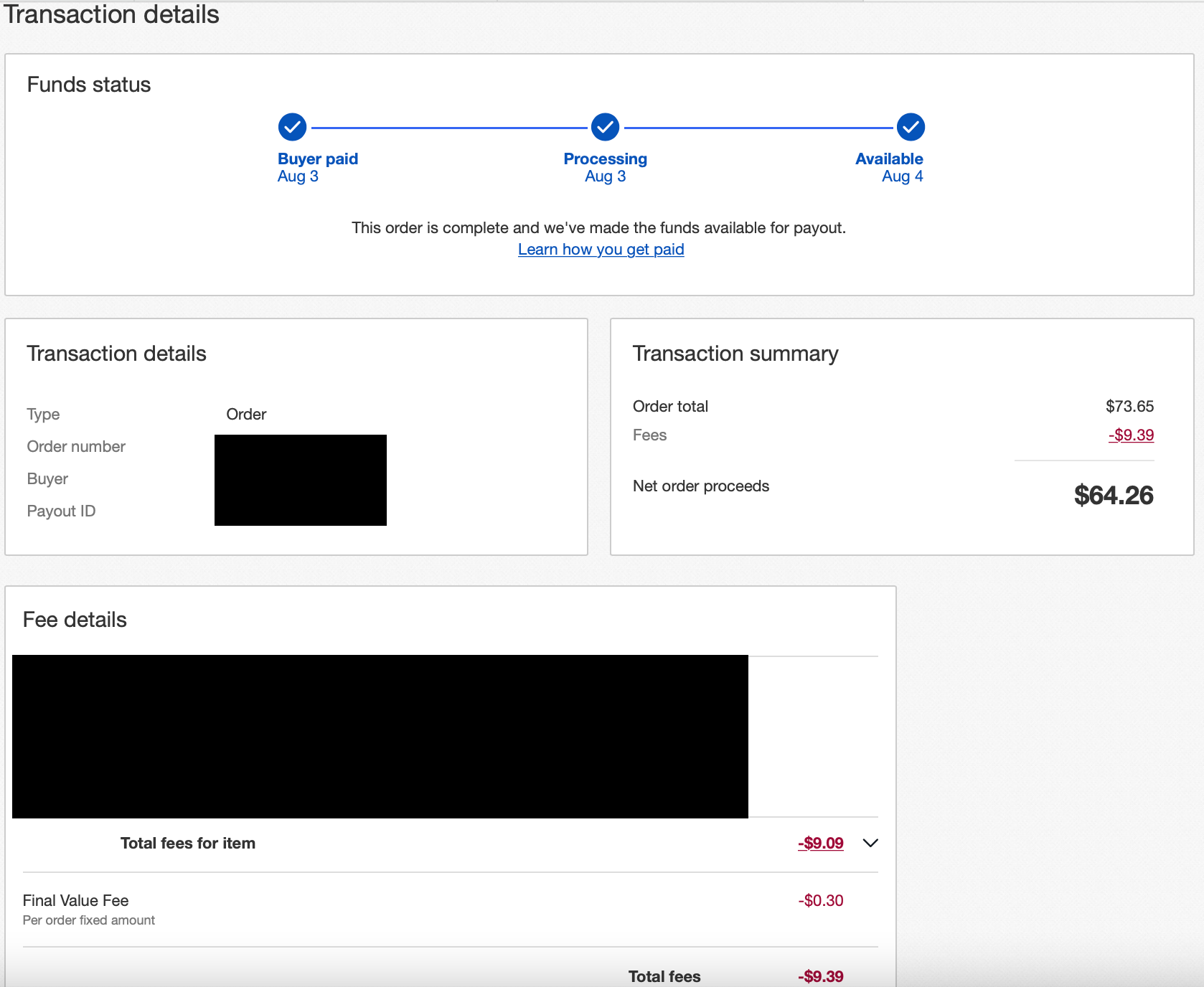 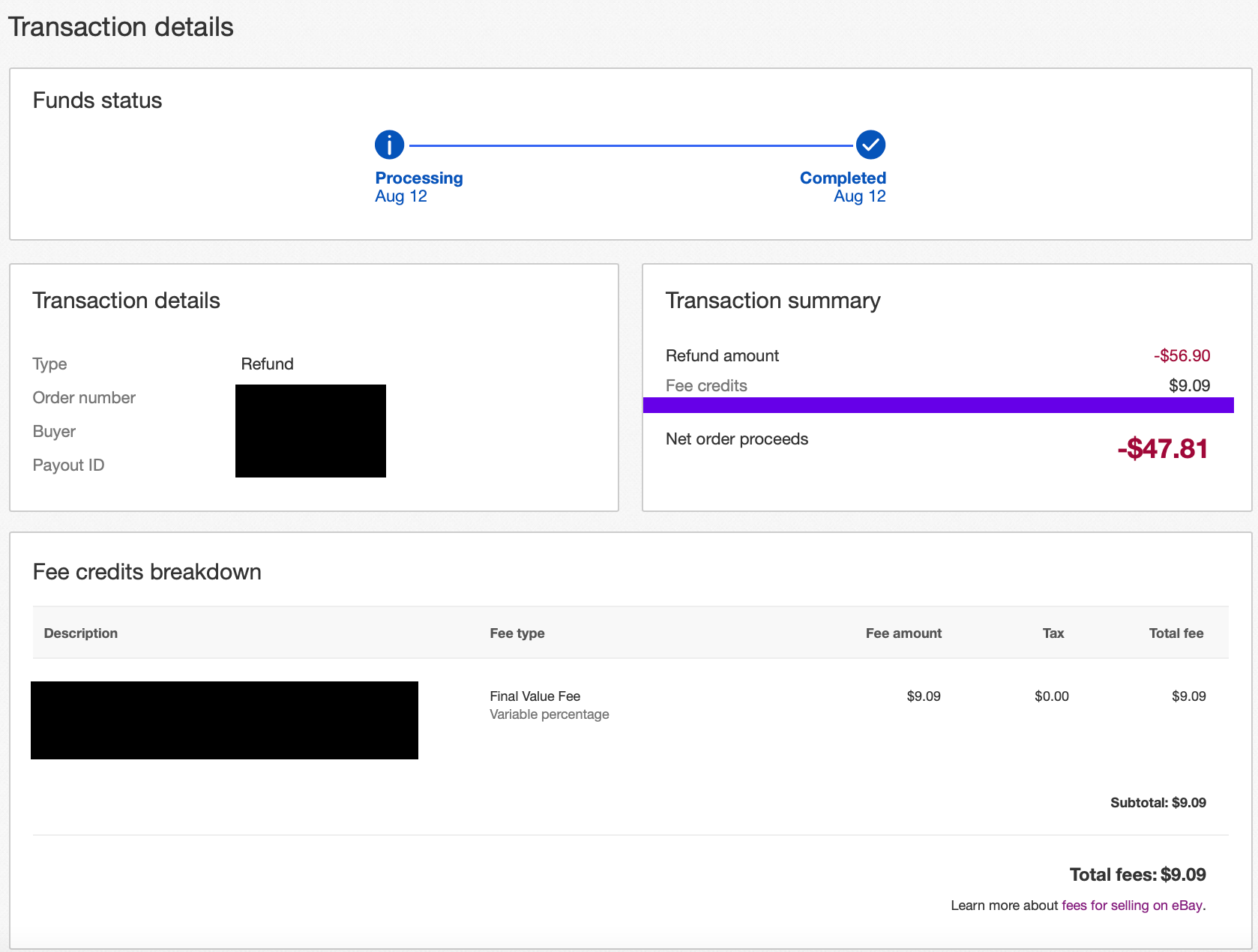 The seller who posed the question in chat responded:

Interesting. I know that used to be the case with remorse returns, but something made me start to think I was wrong. I have a return on the way back now and wanted to get it clarified before I completed the refund.

Did you see the follow-up post on the chat to you questioning the answer I was given? The information page posted still just stated a partial refund would mean no FVF refund (which I knew),but it didn't specifically say withholding the postage would be considered a partial.

Thanks for your example.

To which the original poster said:

I saw Velvet's follow-up and that's why I posted here. In a remorse situation with separate ship costs- refunding item cost minus original shipping is considered a full refund.

Buyer's can't appeal it. They can complain to CS and they might get a courtesy coupon or something- but as far as I'm aware- they can't escalate to a case to say they didn't get a full refund.

You'll see when the return comes back how the process works, Fern. With a situation where you might deduct because of damage- you won't see anything regarding fees. With a remorse return when free shipping was not offered- you'll see the FVF subtracted from what you owe the buyer right there on the return screen before you hit the submit button.

If you see something different then eBay made a major unannounced policy change. Come back to let us know what happens when the item is returned.

So the question remains - was the answer from Velvet@ebay in the chat a mistake or has eBay changed the fee credit policy?

I'll update once we have confirmation either from Velvet or the affected seller.

Have you recently received final value fee credits on eBay refunds that withheld original shipping? Let us know in the comments below!

Sellers report Etsy ads are going over daily budget limit, costing additional fees they had not intended to incur.

Amazon glitch caused under or overspending for some advertisers - now they want answers & refunds.